Okay, since I've recently returned from the most-awesome trip of this decade so far to glorious Roma, I thought I'd quickly share some thoughts here. So, what did we do?

Saturday:
Arrive in night-time Roma Ciampino airport to be greeted with friendly Italian taxi man holding a sign with the ESA logo and my name on it. HELLOO

Sunday:
Breakfast at Hotel Cacciani with cappuccino, pastries and chocolate cake. Train to Rome, then meandering towards ancient Rome via Santa Maria Maggiore and Parco di Triano. Colosseum, and getting hassled by EVERYONE to pay a fortune to go on a guided tour or to buy tourist tat off the street. Headed over to Palatine Hill to buy tickets for Palatine, the Roman fora and Colosseo, and a trundle around the Palatine complex and the Roman ruins atop. Then, jumping into the Colosseum for a waltz around the hulking stadium - Such an impressive sight, and what a feat of engineering: One can hardly take in what it must have been like in its heyday. Then, trekking towards the centre of the city past the Monumento a Vittorio Emmanuele II and stopping briefly at the Palazzo del Quirinale before plodding down narrow streets toward the Fontana di Trevi and delicious hazelnut-chocolate gelato. And finally, as the sun set, a stroll back up Via Nazionale to Piazza Repubblica and Roma Termini station to catch a locomotive back to Frascati. Upon arrival at around 2030, pizza in a traditional tavern and sleep to await the 7am start at ESRIN the next day.

Monday:
Skipped breakfast in order to catch the bus from Frascati to ESRIN from the Piazza Marconi at 7:40, and arrived at ESRIN to start the course registration, begin the lecture talks at 8:30am and get handed ESA goodie bags with the course materials, huge lecture notes book, free pens and paper, etc. to use throughout the week. A morning of lectures, an afternoon of software training on PolSARPro and a cocktail evening in the ESRIN canteen meant that the whole day was > 12 hours door-to-door, and me and Bryface headed back out into downtown Frascati to hunt pizza again in the same tavern as the previous day; all of which was fantastically delicious, too.

Tuesday:
Second day's start was a more respectable bus pick-up at 8:05, and more lectures and software training pursued throughout the day. Found my attention distracted continually by the model International Space Station hanging from the conference room, and plotting potential methods by which I could cut the thing down, stow it aboard my Ryanair hand luggage and get it home without anyone noticing. I was again astounded by the value of the ESRIN canteen, in which you could grab a primo, a secondi and a dolci for little over 2EUR (all delicious); a stark comparison to the £6 or £7 you'd expect to pay for something like that in the UK. So, thanks to my money-saving over lunch, in the evening we wandered to the restaurant below the hotel (in which one of the hotel's residents we'd gotten to know, an guy called Paul from Colorado who was learning to be a chef at various places around Italy) in very-posh surrounding to sample the finer delights Italy has to offer. Expensive (ish), but oddly not as much as the equivalent in the UK would cost, and fantastically cooked and presented cuisine. Awesome!

Wednesday:
Slowly getting used to early starts, and continuation of the workshop's training on SAR polarimetry. Bit of a midweek lull, as the tiredness of the first half of the week finally caught up but the second wind not quite arriving. Elected to stay in hotel and make lazy food from Italian bed, Philadelphia and various snacks. Also: Turns out that Italian coffee is like THE BEST THING EVER, something I totally miss when I'm back home and forced to sup on measly instant Nescafe or something =\

Thursday:
Penultimate day of work, and the end in sight. Wrapped up the final day of lectures and software practicals with pizza at another tavern, in which we were hassled no less than SIX TIMES (perhaps more, my mind isn't what it used to be) by six different flower vendors attempting to sell roses to couples in the restaurants around Frascati. Still, miserly ways prevailed at awesome pizza was rounded off with creme caramel dolci and spending hours flicking through hotel room TV in the vain, unsuccessful hope that eventually we'd find something in English. Alas, no.

Friday:
Yielded our final day at ESRIN, with a series of guest speakers from the major space agencies at institutions across the globe working on spaceborne radar, such as DLR, NASA JPL, Canadian Space Agency, and a keynote lecture from Prof. Wolfgang Boerner. The shorter day today meant we finished at around 5:00pm, at which point I hopped on a train to Rome at Tor Vergata station just outside ESRIN, to meet Bry at Roma Termini and to sample the delights of the Hard Rock Cafe Rome - Lots of nice things to see, including a James Hetfield guitar hidden away in the gift shop, the bass Flea played in the video for 'Give it Away' and a Gibson SG from Angus Young. Also served by a friendly Italian who could have been the spitting image of Nathan Fillion FTW. Last train back to Frascati and bed.

Saturday:
Breakfast and then morning train back to Rome, this time with the aim of heading straight to the Vatican by metro. Arrive in a rainy St. Peter's Square and immediately head into the Basilica, which is free admission to the public and requires going through airport-style security checks. Once inside though, it's a breathtaking sight - Everything is gilt, gold or relic; including Michelangelo's Pieta. Then into the Vatican Museums, through the Pinacoteca to marvel over da Vincis, Caravaggios and Raphaels; through the Tombs of the Popes (past a huge crowd paying their respects to JP II); into the Egyptian Museum and finally into the Capella Sistina - Staggeringly beautiful. Finally, heading out towards Castel Sant'Angelo in late afternoon, to the Spanish Steps at sundown, then South towards Fontana di Trevi again and finally food at a hidden-away restaurant near Via Nazionale. Last train back to Frascati, and well-earned rest.

Sunday:
Spent almost the entire day travelling from Frascati-Rome-London-Southampton, and at the end returned a very tired pair of feet to bed at Flat 5. All in all, a fantastic eight days that I shan't forget any time soon.

And to round it off, here's a bunch of my favourite photos from the week that people on Facebook will probably already be familiar with. Enjoy! 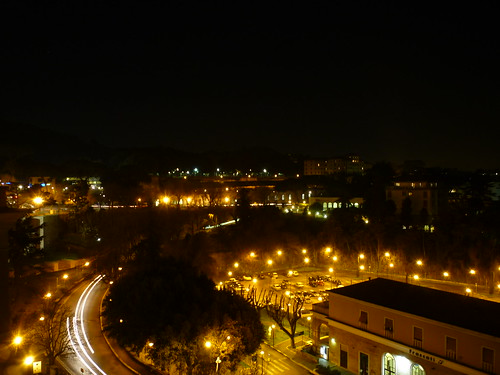 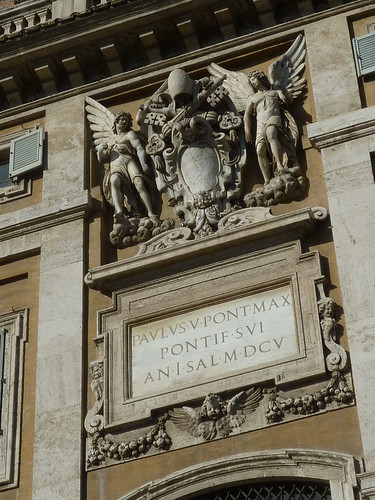 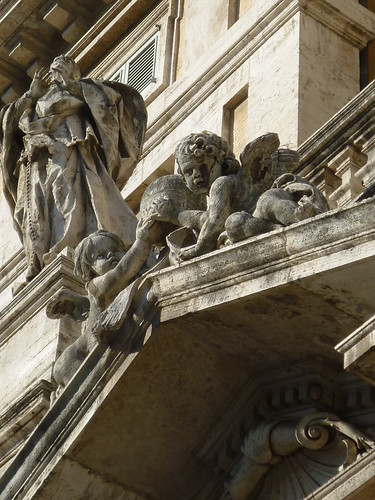 View of the Colosseo from Parco di Traiano: 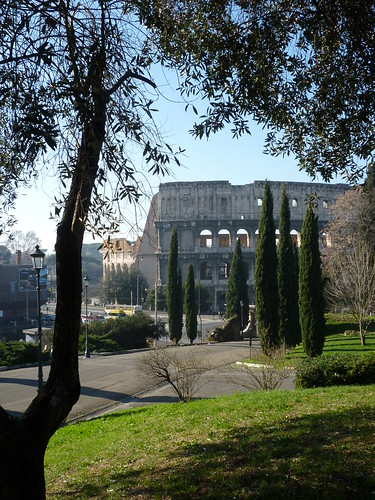 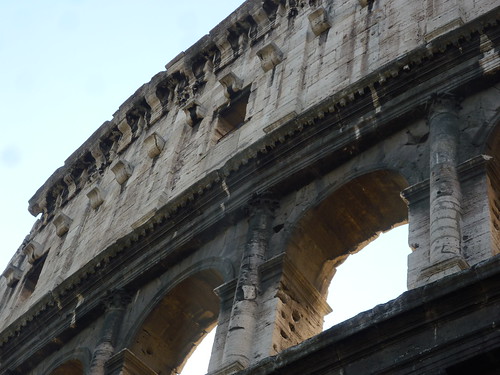 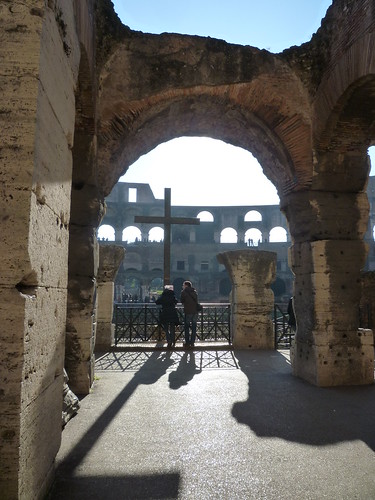 View of the Roman Forum and Colosseo from atop Palatine Hill: 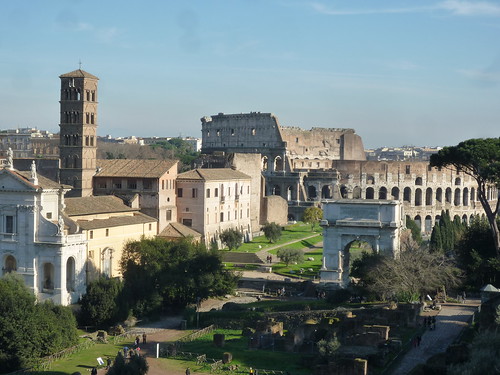 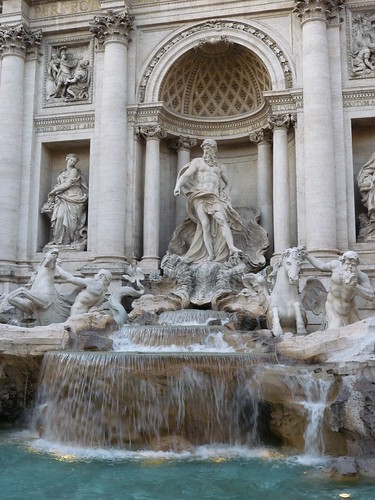 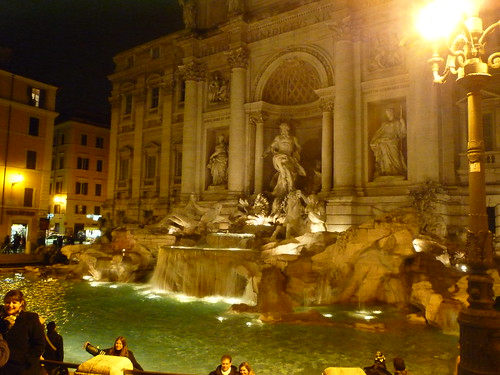 Inside St. Peter's Basilica, the Vatican: 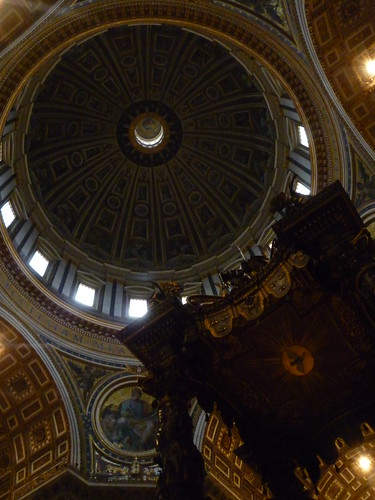 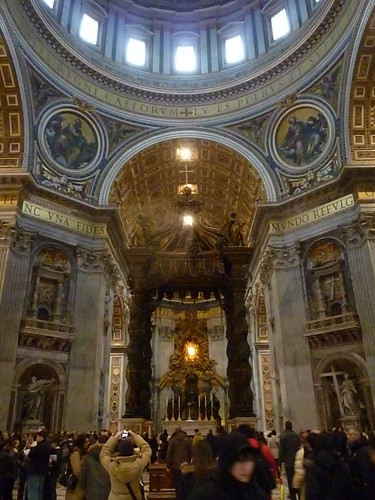 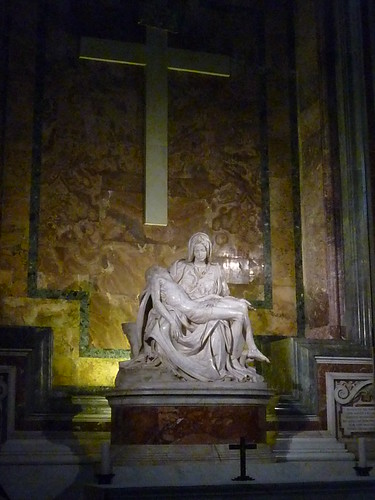 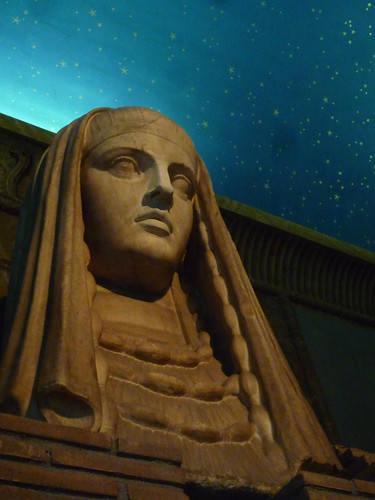 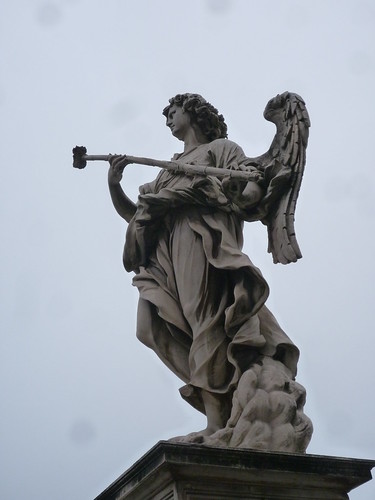 Michelangelo's fresco on the ceiling of the Cappella Sistina: 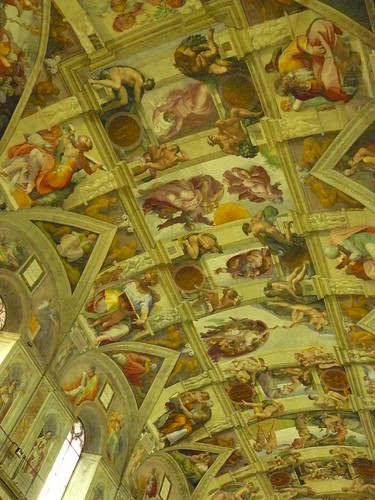 Anyway, apparently we have guests coming over soon, so I'd best scoot. Catch y'all soon.

Gah. I hate four-day weeks: The first couple of days is spent trying to remember what the hell you were doing before the break (made even worse in this case by the extended Christmas break meaning I had a forced ten days out of the office), then the second half is the realisation that you can't finish a normal week's work before the weekend, and inevitably trying to cram it all in before 5pm on the Friday.

It wouldn't be so bad if it didn't seem like just one more day working on this would polish it all off, and the inevitable annoyance that I could have had a blissful weekend off had I had that extra day of productivity that was robbed from me by the New Year bank holiday. As it is, I either 1) Work tomorrow or over the weekend (thus cutting into my own time and meaning that a four-day week suddenly becomes an eleven-day week), or 2) Batten down the hatches, say "sod it" and take the weekend off anyway.

Ordinarily, I'd say "2" all the way, but alas, in the manner in which these things usually circulate, that just leads to me coming in again on Monday, sitting down at my desk and thinking: "Right. What the fuck was I doing?", and that's another two days gone. Pah.

Oh well, that grindstone isn't going to press itself to my nose, so I'd better get on and do it myself. Out.

Kay, since Top Gear Live and MPH Performance Car Show happened a while ago but I never dumped pictures on here, here are a few snaps from my Flickr photostream. Enjoy!

Also offering RockSoc merchandise right now, so if you'd like something then let your mouse linger over here. Low-budget MS Paint renditions of the actual clothing look something like this:

And finally, shameless plug for my Metal Band Logos Sporcle quiz which will be familiar to anyone who came to the RockSoc pub quiz a few weeks back but of interest to those who didn't =D

Right, I've got a bunch of work that I'd like to get done before the Christmas holidays start proper, so I'm going to go make myself look busy. Catch y'all again soon, eep!

Since it's now usual for me to do these things, I thought I'd post my DJ setlist from Monday night's Subliminal at Bridge Bar. Boom!

And on that bombshell, I'm off to the library to scan some books. Yowzah.

The rules: Don't take too long to think about it. List fifteen video games that will always stick with you. List the first fifteen you can recall in no more than fifteen minutes, then put them in order of importance. Tag fifteen friends, including me, because I'm interested in seeing what games my friends choose. (To do this, go to your Notes tab on your profile page, paste rules in a new note, cast your fifteen picks, and tag people in the note.)﻿

Since I've been doing a bunch of design work for RockSoc logos/flyers over the last few months and they're already uploaded to the interwebs somewhere else, I thought I'd post a big round-up of all that work into a convenient LJ blog post; if anything, just to remind me in years gone by of everything that happened in my year-long tenure as VP/Sec of the RockSoc committee.

Anyway, back to work. Catch y'all soon.

A few of my shots from the 1000km of Silverstone Le Mans Series from last weekend. Yatta!